“KFSH&RC” Performed 1158 Organ Transplants in The Past Year

“KFSH&RC” performed 1158 organ transplants in the past year

Dr. Al Qasabi: Last year saw the highest rates of transplants in the history of the hospital in 35 years

The General Organization of King Faisal Specialist Hospital and Research Centre succeeded in carrying out 1158 transplant operations in 2015. It made great records in the number of transplants and excellence in various specializations which included heart, lung, liver, bone, kidney and pancreas, bone marrow and stem cells.

His Excellency Dr. Qasim Al Qasabi, Chief Executive Officer of King Faisal Specialist Hospital and Research Centre said that last year saw an increase in organ transplants as a result of the Hospital advance in quality and quantity  in such complicated and intricate operations in the past years. The Hospital surpassed its own record set in 2014 where 1008 transplants were successfully completed, which is an increase of 15% through six programmes in “Riyadh Hospital” and two in “Jeddah Branch”.

The results of these operations are similar to those of international medical centres, he added, and performing such a huge number of organ transplant operations for Saudi patients contributed in saving the national economy huge amounts of money compared to overseas costs. His Excellency praised the government’s limitless support to the health sector in the kingdom under the leadership of the Custodian of the Holy Shrines King Salman Bin Abdul Aziz.

He pointed to the “King Faisal Specialist Organization” having performed 375 bone marrow and stem cells transplants for adults and children, 323 of which were made at “Riyadh’s Specialist” and that King Faisal Specialist Hospital has a special bank for umbilical cord blood and stem cells that stores more than 5000 units at present, paving the way for more hope to cases that have no matching donor among the family members.

He clarified that the Hospital has a unique programme in lung transplant which is the only one of its kind in the region that doubled its operations with 20 lung transplants.

As for liver transplant, he added, the programme which applies the latest transplant techniques, succeeded in 124 transplants in 2015, 43 of which for children under the age of 17 years, making this figure one of the highest among international medical centres in Europe and America.

And for bone marrow programme, Dr. Al Qasabi explained that the hospital was able to carry out 233 transplants last year with an increase of 31% compared to the year before. The hospital, he emphasized, has a specialized bone bank which is one of its kind in the region too.

His Excellency stressed the great role of Hospital in coping with the increasing number of patients with organ failure and its continuous quest to keep pace with international advances and expanding organ transplant programme. The general Organisation of King Faisal Specialist Hospital and Research Centre has an excellent experience in organ transplant that extends to 35 years.

Heart Transplant in the "KFSH” is an international excellence 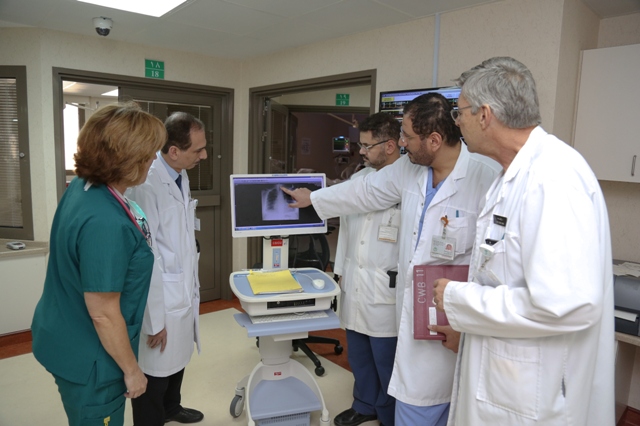 The heart transplant programme at King Faisal Specialist Hospital and Research Centre in Riyadh has achieved outstanding results over the past year in terms of number of operations. It made its way to be among the leading international centres with extensive experience in heart transplant such as Mayo Clinic and John Hopkins in the USA.

The Heart transplant programme at the Specialist Hospital was able to perform five heart transplant operations for five children under the age of 14 years last year. This type of operations is known for its difficulty compared to adults, where the youngest patient was 11 years old. The children’s cases ranged from cardiomyopathy and the weakness of the heart muscle resulting from previously having undergone several operations to repair congenital defects of the heart, in addition to cases of rheumatic heart disease.

The total number of heart transplants performed at King Faisal Specialist Hospital and Research Centre in Riyadh reached 239 transplants since the launch of the program in 1989 while the past ten years have seen the height of the programme with 181 transplants which represents about 75% of the total transplants. The program has been able to raise the success of the operations in the first year to 89%, exceeding the average results of about 250 cardiac centres in 45 countries, which include advanced cardiac centers on North America and some European centres affiliated to the International Association for heart and lung transplants. 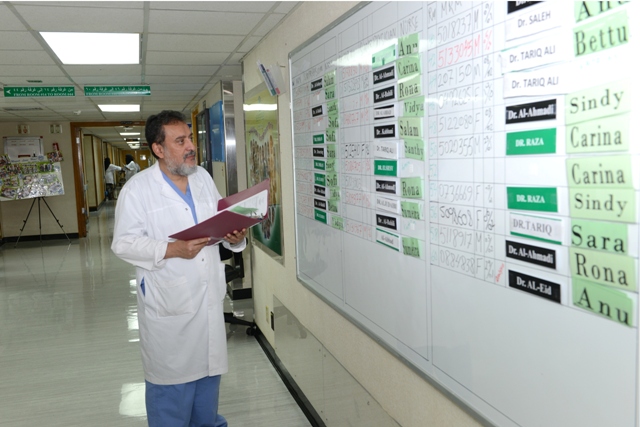 The Liver Transplant Programme at King Faisal Specialist Hospital and Research Centre in Riyadh made great successes in carrying out 124 liver transplants in 2015 with a success rate of about 94%. 81 transplants of which were for adults and 43 for children, making it rank the top global centres with respect to the number of annual liver transplants for children.

Liver transplant operations included 22 transplants from brain – dead donors, and 102 transplants from living donors.  The programme is continuing to apply the advanced technique which it adopted since 2011 where it takes advantage of the donor's liver who is brain - dead and separates it into two parts and transplants them in two different patients.   The hospital has succeeded in applying this intricate surgical procedure and made high success rates as the first medical centre applying this technique.

The liver transplant programme, founded at KFSH in 2001 carries out transplants for different age groups, starting from infants in the first month of life, where the total number of operations reached 840 liver transplants by the end of 2015, 323 of which were transplants from brain – dead donors, and 517 from living donors.

The Liver Transplant Programme at the KFSH continually develops its surgical and medical facilities in line with the continuous medical advances, such as the latest use of laparoscopic technique to remove a portion of the liver of a living adult donor through small openings in the upper abdominal area, and removing it through a small incision at the lower part of the abdominal area and transplanting it in the child who is suffering from liver failure.  The number of cases which benefited from this technique reached 56 last year.

Lung Transplant in “KFSH" is the only one in the region

Since launching the programme in 2003, the total number of patients who benefited from lung transplant reached 93, while the last five years saw the peak of the results with 73 cases, making more than 80% of the total transplants. 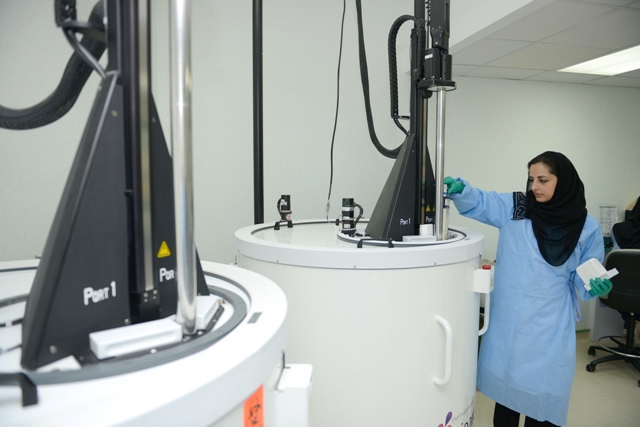 Bone marrow and stem cell programme at King Faisal Specialist Hospital and Research Centre in Riyadh exceeded five thousand 5000 transplants registering 5020 cases since the Hospital launched this type of transplant in 1984, 323 of which were performed in 2015 that included 176 operations for adults and 147 for children.

King Faisal Specialist Hospital applies multiple and sophisticated techniques to provide the right stem cells for patients.  Thanks to its national bank which stores more than 5000 units of umbilical blood and stem cells since its conception in 2006 until 2015, the Hospital was able to perform transplants for cases where a matching donor from the same family wasn’t found and the bank units proved to be particularly effective for children.

The programme includes a national registry of donors of stem cells from non-relatives, paving the way for hope of treatment of more patients with particular interest from the public to join the donor register.

Stem cell transplant is considered to be the best treatment and in many cases, it is the only treatment to cure some diseases which had been thought incurable such as leukemia types (blood cancer), non-hysterogenic anemia, lymphoma, multi bone marrow cancer, genetic immunity deficiency, metabolic disorders and sickle cell anemia. 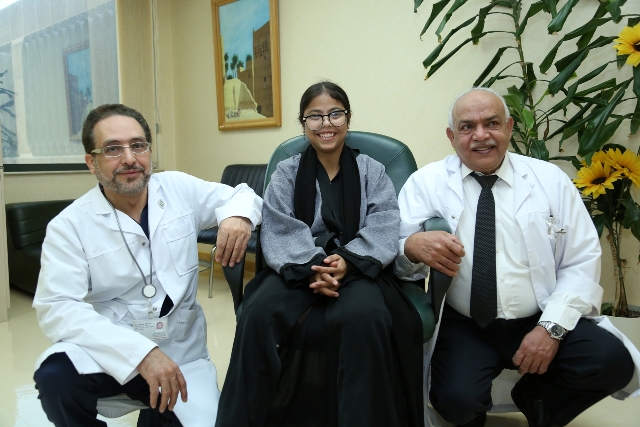 As for Jeddah Branch of King Faisal Specialist Hospital and Research Centre, it made unprecedented achievement with 187 transplants in 2015. This number is considered to be the highest number of kidney transplants in the Kingdom, 159 of which were from living donors and 28 from brain – dead donors. Transplants included 10 kidney operations for children. 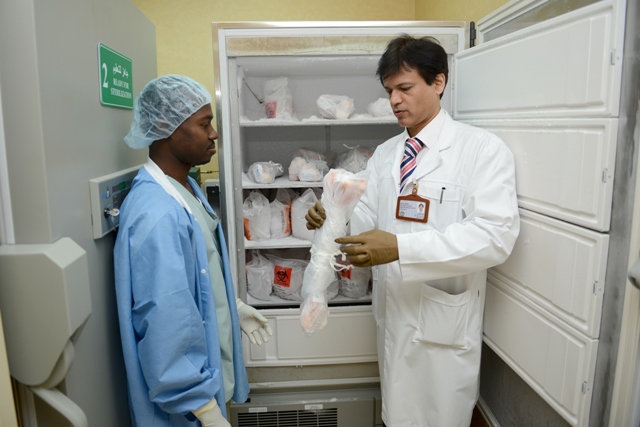 The hospital has a bone bank that is unique to the region and was able to obtain bones from 17 donors in 2015. The bank’s stock reached 900 units in 2015 which included various bones and tendons removed from 76 brain – dead donors in the past years.

Thanks to the Bank, King Faisal Specialist Hospital has reached self-sufficiency and no longer needs to import costly natural or artificial bones. Instead, it provides bone units to a number of local hospitals with the appropriate and safe transport facilities.